I once bought creams online and wasn’t going to be home to receive the delivery guy. I chose one of the collection points near my home. When I approached the place it turned out to be a video store that had nothing to do with creams or perfumes. I didn’t even know there was a video store in the neighborhood. A very nice man went through my contact details, gave me my pack of creams and shampoos, and continued to serve another customer who was looking for an old Japanese horror movie.

At the time, I was surprised, but it is a reality for many businesses in the area. While running their own businesses, they keep packages from Amazon, ASOS, or El Corte Inglés that people later collect like mini-warehouses dotted around the city.

Once you realize it, it’s impossible to stop seeing it. Parcel pick-up and drop-off points are everywhere, at least in Madrid. Every store, tobacco shop, even hardware stores and yoga centers have a DHL, GLS, SEUR or UPS sticker, which marks them as collection points.

We have already mentioned on other occasions how e-commerce and big brands have forced convenience stores to reinvent themselves in order to survive. The ease of buying and receiving the product at home is tempting, and family businesses have had to say “if you can’t fight the enemy, join them.”

Daily management of your business and simultaneous delivery of UPS packages

“The mechanics are simple: the packages arrive, I put them in the app, I save them for a while until the customer comes, I identify them and I give them to them. If the customer does not show up, the driver returns and collects the package. Then there are customers who give me the merchandise, closed and labeled, in the same way I put them in the app and then I give it to the delivery person when he comes to pick it up, and I charge a small commission for each package ” .

So says Juan, owner of his own family business Teacup, a tea shop located in Cuatro Caminos. It has been a SEUR collection point for six years, one of the first to do so in Spain. It covers customers such as Amazon, Zara, individuals or anyone who ships through SEUR. When you run your business, you perform all of the tasks associated with being a collection point.

After those years, he learned to set his own limits: keep only small manageable packages and a limited number of deliveries. “Once they tried to put a refrigerator for me”Juan tells me when I visit him on site in his store, “people don’t care, that’s why I always tell them to be little packages that I keep in the warehouse”, he explains. pointing to a small door behind the counter. . 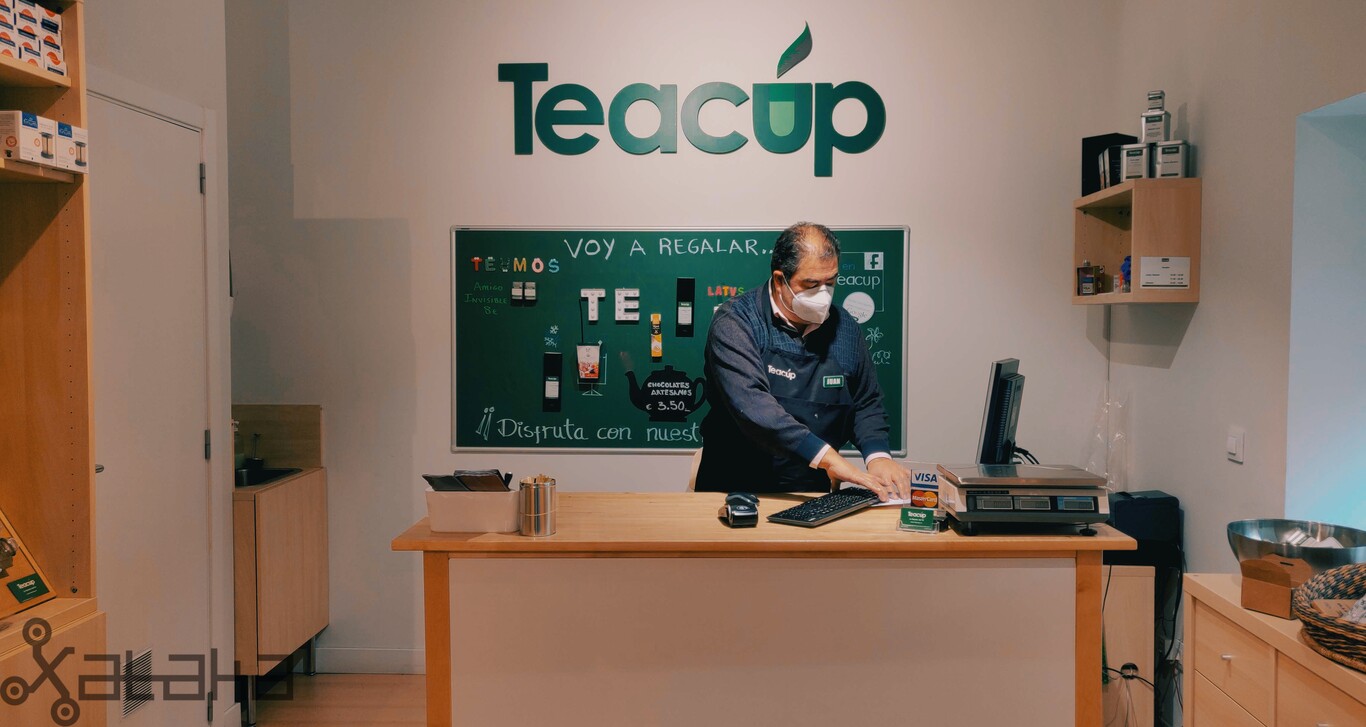 “Then there are certain dates, like now Christmas, when a lot more packages come in than I can deliver. The delivery guys I work with already know, I only take up to a limit and after that there is a queue and people have to wait. Everyone wants to pick up the packages at the same time and on the same day and that can’t be ”.

Opposite is the Kayros Multishop located in Canillejas. As soon as you enter, what is striking is that on one side there is a mountain of brown boxes which are mounted on top of each other. Jose Miguel works with up to four different parcel companies, UPS, Celeritas, GLS and DHL, and for him “I wish there were more”. 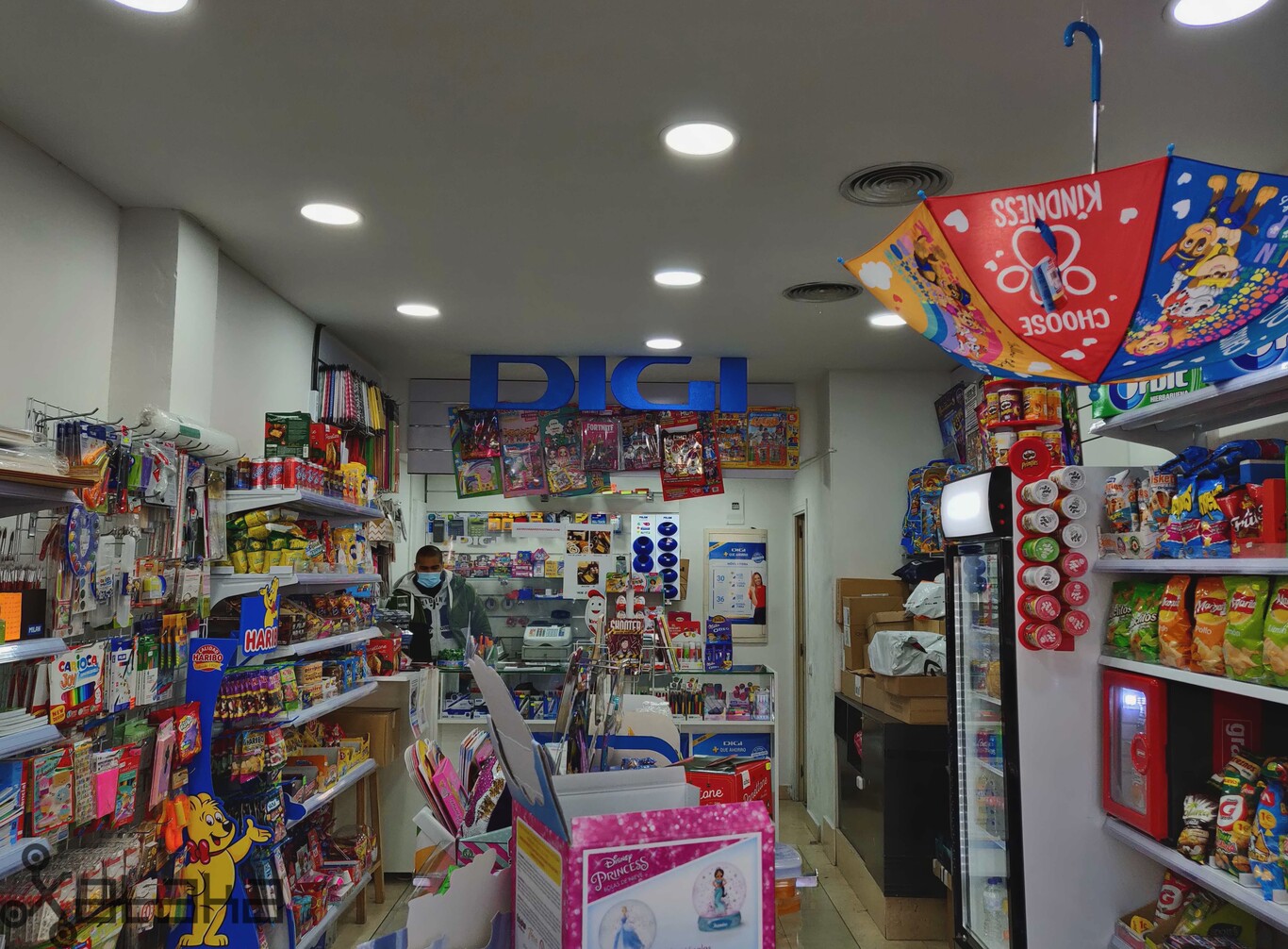 Multi-store Kayros, located in Canillejas, where Jose Miguel works and at the same time keeps the parcels on one side of the store.

It has been a collection point for two years and has gradually been added to more and more collection and delivery services.

“I started with 60-70 parcels per month with Celeritas, now they are surely more than 200. In general these are parcels from department stores: Adidas, El Corte Inglés, Reebok, Zalando, Amazon obviously… And I have a limit which is 1m x 1m, although I have already taken a larger package, for example a single bed, that I can put it here ”, he explains, approaching the side of a fridge. soda, where the rest of the packets and point to space, ”but a double bed doesn’t fit anymore”. 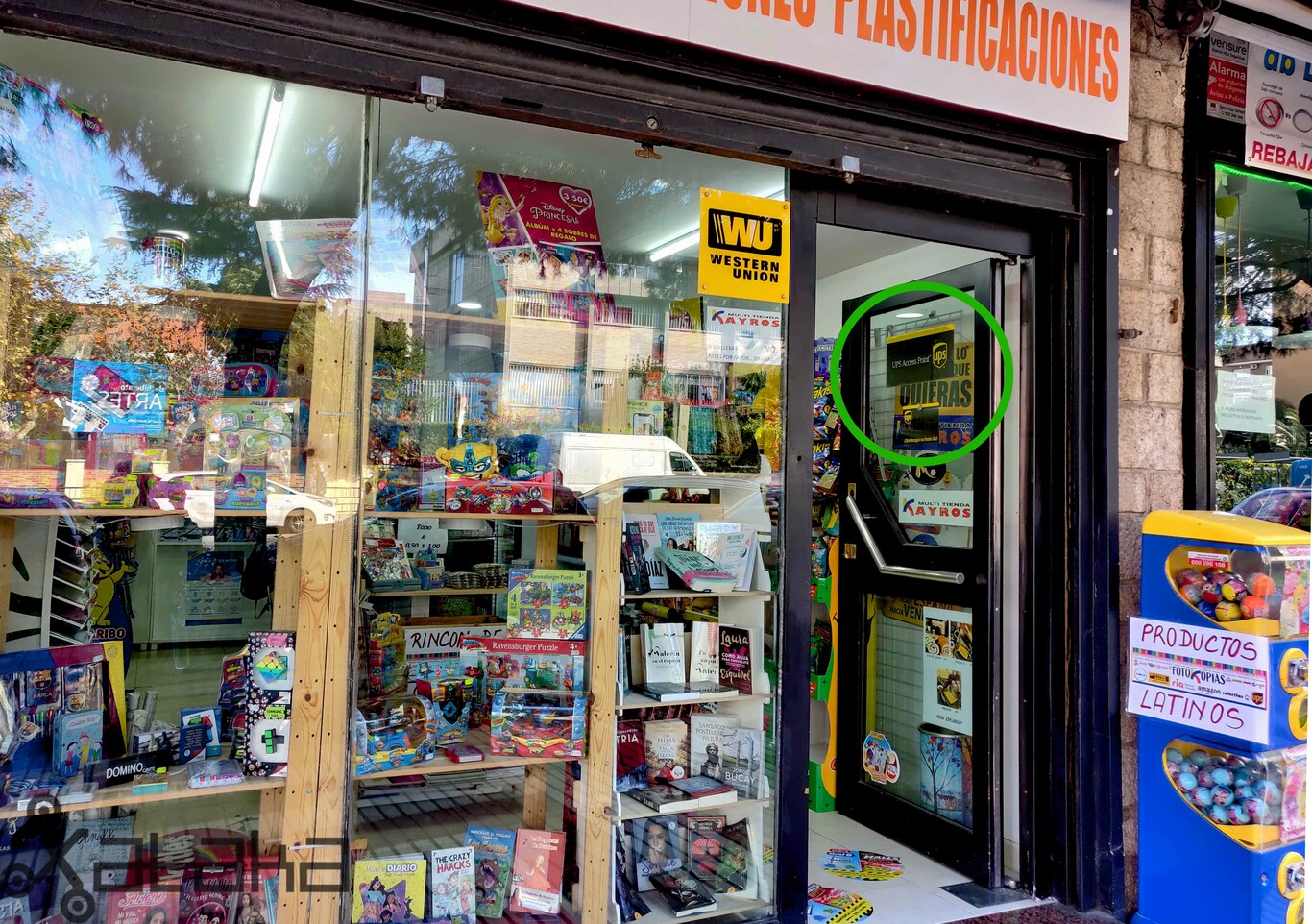 Kayros multi-store, with a UPS sticker.

You would think that Jose Miguel wants the more plans the better for a reason: the more plans, the more commission income. Nothing could be further from the truth. The commission per package is very low, cents. To earn around 100 euros per month, 300 parcels would have to be delivered, or ten parcels per day.

“The main reason for becoming a collection point is that people come, regardless of the fact that it doesn’t generate a lot of income because the commission is very low. If I deliver 300 boxes per month, that’s theoretically 300 customers who should come, right? ”.

Delivering packages doesn’t make me money, but it does bring an influx of potential customers

Juan also states that “what gets paid by commission tends to zero”. He, like José Miguel, does it for two very clear reasons, “One is for proximity marketing”. Collection points are always close to the house, so locals know the place they might not otherwise know.

The second is “For cross-selling, if ten customers come to pick up merchandise, maybe one of them will buy you what you have in store”. “It must be very complementary to a business, it does not take away my place, it does not bring me money, but it generates traffic.

The Tree of Life, a yoga and natural therapy center, is another such company that has made parcel pickup and delivery part of their work routine. When we visit them, we are accompanied by Alberto, the founder of the company. 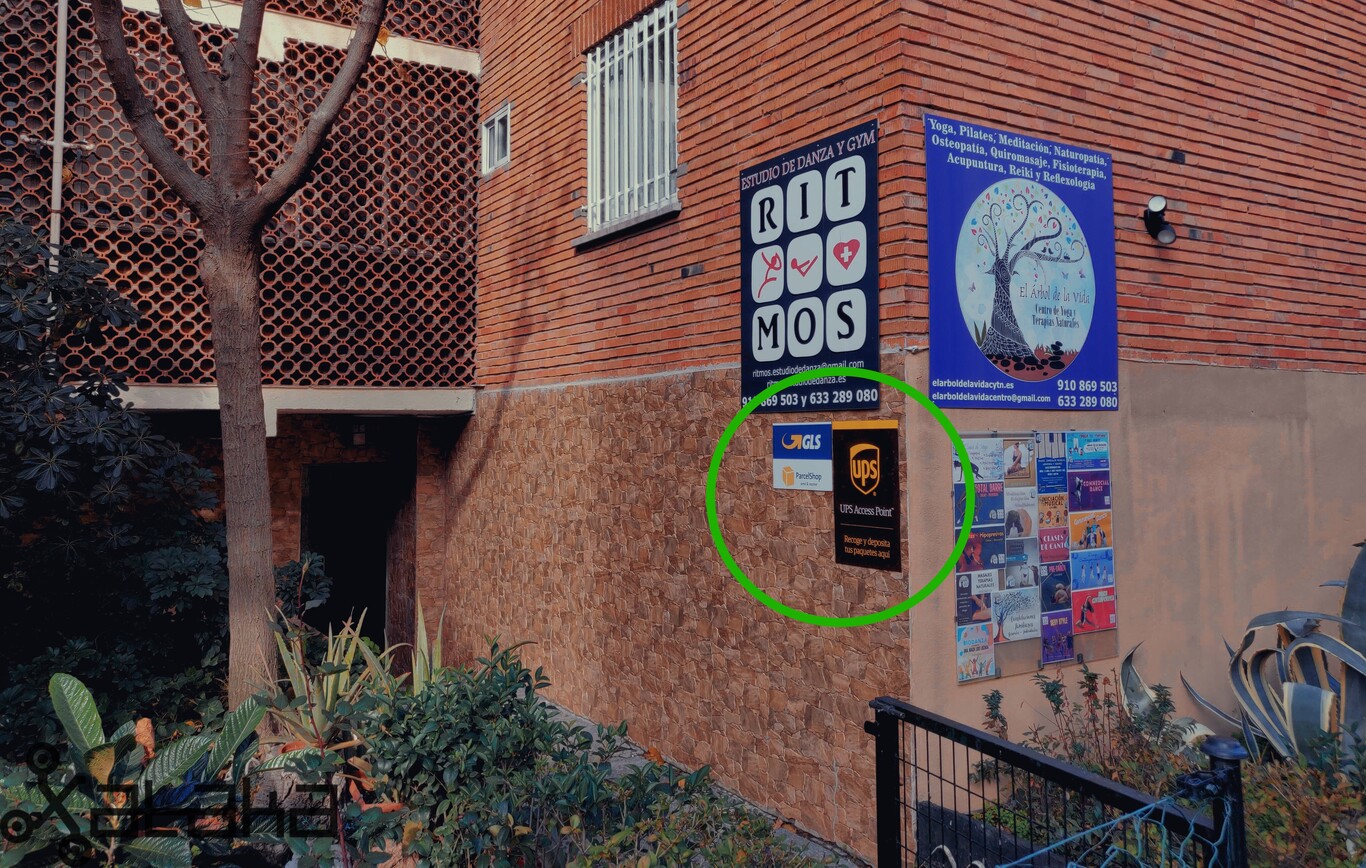 Entrance to The Tree of Life center, both a pick-up and drop-off point for UPS and GLS.

After the pandemic, they started to think about alternatives to reinvent themselves in their business. They also work with gift boxes like Wonderbox or Smartbox, but “the problem is, even though people like the treat, they can come a long way and never come back for it.” “They’d rather go to something closer to the neighborhood, closer, so it seemed like a good idea to become a collection point for packages.”

They have been working with UPS for two months now and recently they have also added GLS service. They also process small packages, no larger than 1m x 1m, just like previous interviewees.

“As the collection points are always close to your home, work, it is also a point for people to come, see the center, see it and keep in mind that you have this yoga center near you. you. This is what interests us, that as the people from the neighborhood come, they get to know the center ”.

All this, he tells us while we are in the main room of his business, interrupted by a delivery man who comes to drop off a few packages. Something that is repeated in every company we visit. It’s a constant influx of delivery people who drop off packages and customers who come to pick them up.

Juan, from Teacup, also relies on word of mouth caused by being a collection point in the neighborhood as people come to pick up packages, but also warns “it has a short lifespan” .

“In the first year there is a big effect because customers don’t know you at first, but over time they do. In fact, this Christmas, I would even prefer he wasn’t here, because I serve my clients better.

Jose Miguel is doing the opposite, precisely he wants more packages to arrive so that more people can enter his premises. In your calculations, if you receive an average of a thousand boxes per month and each person who enters buys around two euros, it is already more money at the end of the month that is much needed.

“If it weren’t for the fact that I’m a collection point, people in the neighborhood wouldn’t come in or meet me. After two years, there are still people who arrive, collect their package and then ask me: is this new?

Not all businesses are worth

There are certain requirements to be a collection point. “We look at their location, how much space they have for storage and when they work,” says Alfredo Echevarría, Customer Marketing Manager for UPS Spain and Portugal. “The idea is to be able to offer a wide schedule, which are open in the afternoon and on weekends, so that customers can pick up or drop off their shipments when it is most convenient for them. “This is where businesses such as pharmacies, stationeries, tobacconists and even gas stations come in. They now have more than 1,600 collection points throughout Spain.

The Spanish division of DHL, DHL Parcel, is preferred for stationery store, computer stores and company with extended hoursincluding weekend if possible. Also that they have storage space and that there is a possibility of cross-selling for their employees. In addition, they are looking for deals with chain stores that identify with their brand positioning. DHL Parcel Iberia now has 3,700 collection points on the peninsula (Spain and Portugal).

According to Juan, who before leading his tea business was director of technology and projects at SEUR, when choosing which companies will be collection points, they rule out, for example, the hospitality industry. “They are not looking to be related to restaurants or bars because the attention is not the attention they expect from customers, they prefer to be related to another type of business.” We have contacted SEUR for this report regarding their selection processes, but have not received a response.

“I don’t think that’s the transportation solution either.” His background in logistics tells him that it is “a very precarious business because you move to the parcel delivery variable while you keep all the costs fixed.” This is why there is a very high turnover of stores, because in the income account it does not work. Today that interests me, but when it starts to annoy all the stores, we stop ”.

A new Goodwill store has arrived along the Golden Mile in Frederick. Goodwill Industries of Monocacy Valley welcomed customers to a new location at 1003 W. Patrick St. Friday, offering men’s, women’s and children’s items, household essentials, home decor and more. “We are thrilled to be a part of the redevelopment of Frederick,” said Holly […]

As the future of fashion weaves more closely into the digital realm, fashion brands strive to stay competitive in these times of rapid change. Almost everyone in fashion agrees that in order to thrive even in times of disruption, brands need to focus more on e-commerce. According to the McKinsey 2021 State of Fashion report, […]

The trend of ecommerce is the new way of life, and it’s no wonder that more and more companies and brands are leaping into the online space to reach the modern audience. Following in the footsteps of its Western counterparts, Wizards of the coast will debut on Shopee Singapore, marking his very first e-commerce storefront […]